Bay Street is not unlike many of the main arteries and side streets leading into Bridgetown. It is a busy street, lined with telephone and electric poles and their jungle of tangled wires. The poles are set on the scarce and narrow sidewalks or on the edges of the road.

There is something strangely nostalgic about the wires and poles. It is authentic: no cover ups - it's all above ground with nothing hidden. What you see is what you get. You know you are in an older world with the values of tradition.

Bay Street is different in many respects. It is an open window to Carlisle Bay and one of the most magnificent beaches on the island. It allows easy access to the beach which is much enjoyed by locals and tourists. The street is peppered with a wide-ranging collection of rum shops, homes, clubs, government buildings and businesses. 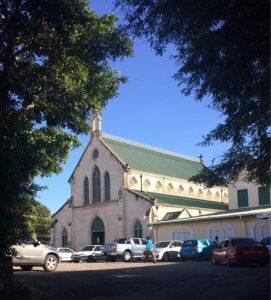 It is perhaps the most diverse Bridgetown street in this respect and this mix gives it a vibrant sense of community. There are 3 churches that ring the bells in the community. One of them is the Saint Patrick's Roman Catholic Cathedral. Maybe the best reason for the presence of all three denominations (Anglican, Methodist and Catholic) is that the street has, in the past, been the 'Red Light' district of the island.

In times past, Bay Street was swinging with jazz bars like the Belair Jazz Club, the old Copacabana and the Salt and Pepper Club with saxophones and bass serenading all who came to while away the small hours with rum and entertainment. Jazz is still alive here at Lobster Alive and the Waterfront Cafe on various night of the week.

Now the beaches are the daytime playground for many who enjoy snorkelling, swimming with the turtles, and all forms of watersports. The Boatyard and the new Pirate's Cove have all-inclusive days with dining and dancing on the beach.

It is an eclectic street with its unfortunate share of derelict historic houses that still display their special charm, even in disrepair. The form and balance of the traditional Chattel house can be seen transcribed onto some of the more elaborate houses, with the fine fretwork influences of a Victorian age.

It is a street in transition. It is now in a state of rebuilding its past glory, in the spirit of the historic and stately buildings of the UNESCO Heritage sites: The Garrison Savannah, the Museum (which was once a military prison) and the house where George Washington stayed on his extended visit to the island. Nearby are the Gallic Georgian Palladium, the Military Barracks and Drill Hall.

Here too is the once Royal Barbados Yacht Club - now just the Barbados Yacht Club - a members-only sailing and social club that has a tarnished history of keeping its membership pure with like-minded people of the once ruling class. Today it is far more multicultural with a growing open-minded younger generation setting a new tone of inclusion in an exclusive club. It welcomes visiting yachtsmen and extends reciprocal membership to many international sailing clubs.

Down the road beside the Boatyard is the site of the proposed 15-story Hyatt Hotel. The Bay Street and Garrison areas already host three international chain hotels - Marriott Courtyard, Hilton and Radisson Aquatica.

Bay Street is a main artery connecting the South Coast to Bridgetown, the Capital City of Barbados. It ends at the Independence arch overlooking the Careenage with a modern lift bridge that is closed to road traffic. It is open to pedestrians except for the times when it draws up to let tall ships pass in and out.

It is a proud street hosting the Office of the Prime Minister and other government buildings. It is also home of the statue of Sir Grantley Adams, the first and only Prime Minister of the West Indies Federation. His statue stands at the entrance to Government Headquarters along Bay Street.

The street has a gallant historical past, playing a vital role in protecting the British Empire from the time of the first British settlers in the 17th century. In those early days of colonization, Barbados was an important port for Trans-Atlantic shipping and Bridgetown's fortifications were linked along the Bay Street corridor from Bridgetown to the Garrison.

The natural harbour of Carlisle Bay was the first port of call on the Trans-Atlantic routes and was perfectly positioned as the launching point for the projection of British Imperial power against the French, Spanish and Dutch aggression and to defend and expand Britain’s trade interests in the region and the Atlantic World. Bridgetown and its Garrison was also a conduit in the transmission of ideas and cultures of the developing colonial enterprise in the Atlantic World. (read more at http://whc.unesco.org/en/list/1376)

One of Bay Street's most daring adventures was the establishment of a public housing community just across from the Boatyard, in prime real estate just across from the beach. The houses are well designed and don’t look much like any council housing estate anywhere. They look like prime condos and are cared for with great pride. This is the sort of inspired leadership which, with some luck, may guide the development of the area in the future.

Copacabana Beach Club - Rent a beach lounger and spend the day on one of Barbados' most beautiful beaches. The bar and restaurant serve up refreshing drinks & delicious light meals.

Cuz Fish Shack - A must-visit place on any trip to Barbados. Simply the best fish cutters (sandwiches) on the island.

Barbados Hilton - Five star resort located directly on a white beach where a reef almost makes a natural swimming pool out of the ocean! Read more...

Nautilus Beach Apartments - Located on a wide sandy beach with calm turquoise waters, these self contained apartments are close to nightlife, watersports and many other activities!

Radisson Aquatica Resort - Spectacular Barbados resort with dining on the jetty. Located on one of the best beaches on the island. Read more...