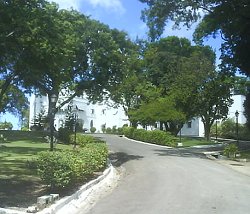 Government House was built in 1702 and was the official residence of the Governor of Barbados.

The home is now the official residence of the Governor General, who acts as the local representative for the Head of State Her Majesty Queen Elizabeth II.

The Governor General is appointed by the Head of State on recommendation by the Prime Minister of Barbados.

Government House is the venue for several goverment functions and official engagements including welcoming Prince Edward, Earl of Wessex, and Countess Sophie whose visit to Barbados formed part of the celebrations of the Diamond Jubilee of Queen Elizabeth II.

The gardens and grounds at Government House are quite magnificent. Tropical flowers abound in carefully laid out gardens while mature Mahogany trees and Royal Palms tower overhead. The Royal Palms are favoured by a flock of wild parrots.