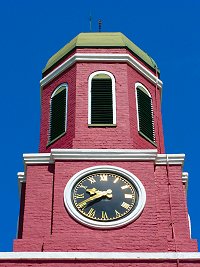 The Caribbean is still full of secrets. One recently revealed is that Barbados has the world's rarest collection of 17th century English iron cannon.

Not too long ago it was decided to create a National Ordnance Collection of all the old guns on the island and to date more than 400 have been unearthed.

"The island is littered with old cannon", said Major Michael Hartland, who is the driving force behind this collection's acquisition. "We have found them in gardens, cellars, on beaches, embedded in the sides of buildings and buried under fortifications", he informed me as I sat in his roomy office which is located in the historic Main Guard House which sits in the Garrison Savannah. It's an elegant Georgian building (Circa 1802) with a graceful clocktower and is now the headquarters of the Garrison Committee of which Hartland is the secretary.

He went on to tell me that the reason there were so many guns on the island was that during the 17th & 18th centuries Barbados was an important military base which the British used to protect their interests in the southern Caribbean.

When a nucleus of cannon had been collected, Charles Trollope, an English apple farmer (who also happens to be a world authority on ordnance), was invited to come to Barbados and catalogue the collection. He arrived armed with copies of the Royal Armory archives now stored in the Tower of London. The British, like the Spanish with their bullion, kept meticulous records of all cannon shipped to and from the West Indies. To everyone's surprise, a treasure trove of ordnance was revealed. More than half the cannon were cast in the 17th century. The oldest cannon found was cast in 1620 and the youngest, dated 1870 is one of the rarest: called the Victoria Gun (in photo) is the first rifled muzzle loader made in England. Not all the cannon found were English, with Dutch, Spanish and Swedish cannon coming to light.

"Let me show you the gem of the collection", said Hartland leading me out onto the broad verandah which surrounds the Guard House. Here covered with a green tarpaulin was yet another gun. As I helped him unwrap it he told me it was the rarest cannon of its kind ... a Commonwealth Cannon. Only one other is known to exist and it can be found in the Tower of London. What makes it so rare? Following the death of Oliver Cromwell, King Charles II instructed that all cannon with Cromwell's Coat of Arms embellished on them be struck off so that all official traces of Cromwell's rule (he had executed Charles II's father) would be removed. It is a cannon of extreme historical importance.

Twenty-six of the most important pieces in the collection are mounted in front of the Main Guard House and make a fine photographic display.