Christ Church, Barbados, June 9th 2012 – For the second time in three years Atlantis Submarines (Barbados) Inc. has won three awards at a major tourism award ceremony taking home the top prize in all three of the categories contested.  Following a similar feat at the Barbados tourism awards in 2009, Atlantis Submarines has shown their consistency, continuous pursuit of excellence and their unerring efforts to contribute to the viability and vibrancy of the tourism sector.  An elated Atlantis Submarines team was on hand to collect the awards last Saturday evening at the Barbados Hotel and Tourism Association’s President Awards. 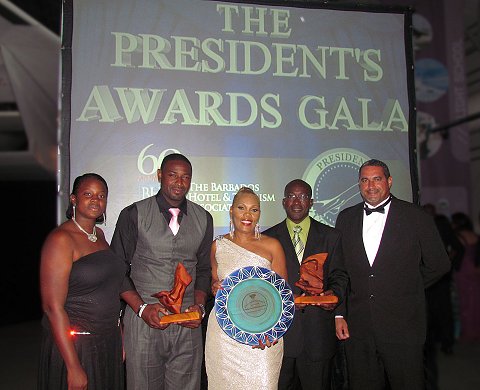 Staged in a completely unique location under the belly of the now museum-based legendary Concorde plane, Atlantis Submarines (Barbados) Inc. emerged the recipient of the Business Excellence Award for Direct Tourism Services, the Green Initiative Award and the inaugural Schools Tourism Education Program Award.  The latter was shared by the Hilda Skeene School, which is one of three schools adopted by Atlantis Submarines in the pilot phase of the STEP program.

When asked to reflect on this achievement, General Manager of Atlantis Submarines, Roseanne Myers said  “The team at Atlantis Submarines is elated by this recent success and though times are tough we remain engaged and focused on making a contribution to the economy and to  participating in this signature tourism event.  We received Green Globe recertification in 2011 and continued our efforts to reduce our carbon footprint with a major change out to LED lighting in 2012.  In 2011 we were the first attraction to become Hospitality Assured certified and were assigned and worked with three schools under the STEP program with most interaction being with joint winner Hilda Skeene school.  We have been busy and are very appreciative of the recognition.”

Atlantis Submarines operates two 48 passenger submarines that provide the opportunity to see the underwater world in safety and comfort and to enjoy the reef and fish life, during the day and at night that many non divers do not get to see.   For more information please visit our website www.barbados.atlantissubmarines.com or email us at bdsres@atlantissubmarines.com  Photos of the event can be found on www.facebook.com/AtlantisBarbados

Activities & Attractions, Barbados Travel News
activities, atlantis submarines, attractions, awards, barbados, BHTA
Was this helpful?
How can we improve it?