375th Anniversary of Parliament of Barbados

On February 28th 2014, Barbados celebrated the 375th anniversary of our Parliament with a wonderful day of festivities! Here’s how we spent the day….

The morning ride into the capital city Bridgetown, where the celebrations were being held, was even more hectic than usual due to traffic diversions and special passage for official vehicles with sirens blaring. However, moving slowly gave us the opportunity to admire the lovely old homes that we usually just whizz past on our commute. Still it was a relief to be safely parked and heading on foot to Parliament Buildings.

A crowd began to build comprised of Bajans, visitors to the island and cruise ship passengers passing through Barbados for the day. The sweet sounds of the Royal Barbados Police Force Band signaled the arrival of the parade, which had started at nearby Queen’s Park, with various groups (Cadets, Guides, Scouts, etc) carrying the flags of the Commonwealth member states. The Mounted Unit drew particular appreciation from the crowd.

The playing of the national anthem of Barbados was accompanied by the unfurling of the 53 Commonwealth flags on flagpoles directly in front of Parliament Buildings. It was a moment to reflect on the reach of the British Empire and the sovereignty now enjoyed by these nations, including our own.  A group of Canadian visitors standing nearby excitedly took photos of their national flag as we tried to identify as many as we could. 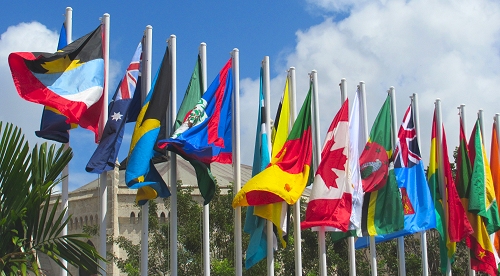 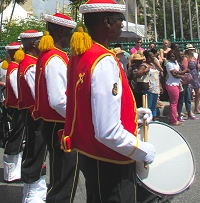 Next up was the Changing of the Sentry ceremony, which is generally performed at the Main Guard in the historic Garrison area. Today it was on display on Broad Street in the heart of Bridgetown. The colourful  Zouave band is used extensively in this ceremony and as usual delighted the crowd with lively music and marches.

On a beautiful sunny day there was just time for a cooling drink of water and an orange “snow cone” before heading closer to the stage to see a re-enactment of a “Dignity Ball” featuring elegant ladies, an English prince and a local pirate!

We headed over to the waterfront boardwalk for the lifting of the bridge and display of small yachts with salute by HRH Prince Edward. The coast guard officers informed us that the event wouldn’t be taking place for a few hours,  so instead we relaxed and enjoyed the waterfront view, disappointed to miss this aspect of that celebration but thoroughly delighted by the morning’s activities!

There is always something exciting happening in Barbados, from daily activities to annual festivals and events that this that only come along every couple of hundred years!

Enjoy this video of the day’s events:

Barbados Travel News, Heritage
barbados, heritage, history, parliament
Was this helpful?
How can we improve it?