Over the years I have been fortunate enough to attend several turtle hatchling releases on the shores of Barbados and each time has been a memorable experience.

It’s uplifting to these little creatures fight their way down the beach, a beach to which the females who survive to sexual maturity will return to one day to lay their own eggs. The struggles they will face are tremendous;  from the minute they reach the water predators abound. They will have to withstand natural predators and the greed & carelessness of man, to make it back here.

I was first made aware of the hatchling releases by a friend who regularly attends. She in turn had a friend who volunteered with the Barbados Sea Turtle Project and alerted her whenever a release was taking place. 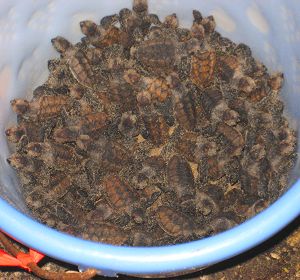 My first release was at Worthing Beach on the south coast of the island. It was quite informal in those days, with guests being encouraged to touch the hatchlings. I recall standing at the water’s edge, waves gently breaking over my ankles, watching the last of the hatchlings swim out to sea.

The emergence of Facebook made becoming aware of releases much easier – I simply like the Barbados Sea Turtle Project page and am alerted to the time and location of releases.

I’ve attended several releases on the west coast of the island, mainly at Good Shepherd beach in Fitts Village, just a few minutes drive from my home. The crowds have gotten bigger over the years; but the volunteers have everything well organized. Children are invited to help empty the bucket of hatchlings onto the sand and assist any that get stuck on their way down the beach. However there is much less handling of the turtles, which is probably a good thing.

A few years ago a small number of hatchlings stumbled into a drain near my home. The Sea Turtle Project staff advised to contain them in the shade on a bed of sand and release them on the beach just after sunset. At that time, they can follow the light of the moon and are safer from predators on the beach and at sea. If they had been kept in water (as was my natural instinct to do) they would have started paddling and quickly exhausted themselves before release. I’m thrilled that they all made it safely to sea and said a quiet prayer that at least one would survive to continue the species.

The odds truly are against them. In fact only about 1 in a thousand will reach adulthood.

That makes the fight to save each hatchling even more important. The volunteers of the Barbados Sea Turtle Project must be highly commended for the rescue work they do, along with hours of research and education that will truly have an impact on the survival of these lovely creatures.

We’re very fortunate in Barbados to be a nesting ground for the Hawksbill, Green Turtles and Leatherbacks and everyone, locals and visitors, are encouraged to do their part in protecting the turtles. If you see a nesting turtle or hatchlings emerging from the sand, please report it to the Barbados Sea Turtle Project.

Remember to like the Barbados Sea Turtle Project page on Facebook for alerts of releases. I hope you have the opportunity to attend at least one.

Hawksbills are the most commonly found species nesting on Barbados beaches and do so mainly between mid-May and late October.  Leatherbacks in Barbados nest between February and July. Green turtles nest around the same time as Hawksbills.

A Hawksbill nest contains an average of 150 eggs, a green turtle 110 eggs, and a leatherback 85 eggs.

Eggs remain in the sand for an average of 60 days before hatching. The hatchlings make their way up to the surface, taking 2-4 days to emerge.

Once the hatchlings make it to the sea, they swim frantically for approximately 72 hours.

It is illegal in Barbados to catch any species of sea turtle or possess any turtle product.

Activities & Attractions, Barbados Travel News
barbados, hatchlings, hawksbill, turtles
Was this helpful?
How can we improve it?