Barbados’ capital city Bridgetown and the nearby historic Garrison have gained approval to the prestigious World Heritage List!

In approving the nomination the World Heritage Committee stated that the area was an outstanding example of British colonial architecture.

Bridgetown was established in 1628 and quickly became the hub of commercial activity in the island. Bridgetown is home to many historic buildings and monuments including the 3rd oldest parliament in the Western Hemisphere, a statue of Lord Horatio Nelson that predates that in Trafalgar Square and a monument to fallen soldiers. 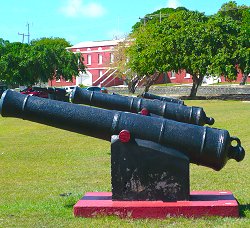 Part of the impressive cannon collection at the Garrison in Barbados

The Barbados Garrison was established in 1780 and was the largest in the British colonies. The Garrison Historic Area includes many historic buildings  and is home to  the world’s largest collection of 17th century English cannon.

A statement from the UN Educational, Scientific and Cultural Organization (UNESCO) said of the area: “With its serpentine urban layout, the property testifies to a different approach to colonial town planning compared to the Spanish and Dutch colonial cities of the region, which were built along a grid plan”.

On your next trip to Barbados be sure to visit these historic sites!

Heritage
barbados, bridgetown, caribbean, garrison, heritage, historic
Was this helpful?
How can we improve it?