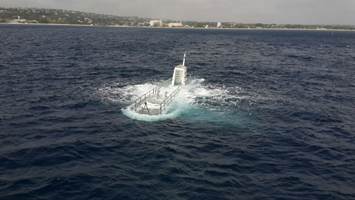 August 19th 2015 – Bridgetown, Barbados – As the Caribbean and specifically Barbados battles the Sargassum problem that has plagued them with increasing frequency and magnitude over the past three years, Atlantis Submarines Barbados has so far escaped the onslaught. There is a perception that there is seaweed everywhere but nothing can be further from the truth. The submarine dive site is as clear and pretty on the surface as always so far. Atlantis Submarines Barbados dives one mile off the west coast of Barbados and this “gold” coast which is home to some of the most luxurious properties, has been minimally affected so far. In comparison the East and South coast have taken the brunt of the impact.

General Manager Roseanne Myers has updated on their internal response by saying “Though the west coast where we dive, has been unaffected, our safety team has met to discuss and put monitoring mechanisms in place. In our assessment the Sargassum invasion is not likely to have a serious effect on the submarine tour. We have been experiencing the bump in business from Crop Over 2015 and this has remained strong for the first few weeks in August. No sargassum sorrows here”. Mrs. Myers went on to add, “We dive from 50 to 150 feet below the surface (about 15 to 45 meters) and therefore as the seaweed is mainly a surface dweller, the underwater and visibility down to that depth is unaffected. On the surface the submarine can operate anywhere and with the surface control boat always on alert, if there are areas of seaweed, the submarine will be directed simply not to emerge or submerge in the midst of it. So far the most we have seen are a few handfuls, at worst.”

Atlantis Submarines operates two 48 passenger submarines in Barbados that provide the opportunity to see the underwater world in safety and comfort and to enjoy the reef and other marine life, during the day and at night. This adventure is one of the most unique and highly recommended attractions in Barbados. For more information please visit our website where you can also connect to all of our social media platforms. The Green Atlantis page seeks also to capture what is being said on this and other environmental matters. Sargassum, according to the resource guide for the Caribbean Alliance for Sustainable Tourism (CAST) published in July of 2015 is defined as follows “Sargassum is a species of brown algae. There are two species commonly found in the Caribbean (s. natans and s. fluitans). It is free-floating seaweed and will not attach to the ocean floor; its movements depend solely on ocean currents. It is an essential habitat for over 250 species of fish and invertebrates.” Atlantis Submarines is encouraging its staff and general public to educate themselves on the issue. The CAST Sargassum Resource Guide for the Caribbean seeks to provide facts and direction to all concerned on dealing with this matter and can be found at this link http://bit.ly/CASTSargassum. This has been posted on our website’s Green Atlantis page as well as an article “The Sargassum Saga 2015, a roundup of what is being said” and on our social media platforms.

Mrs. Myers went on to say “Recognising that anything that affects the island as a whole can affect Atlantis Submarines, we are prepared to sound the alert if we were to detect a change that our other west coast tourism partners need to be aware of. No such occasion or need has yet arisen. She opined “The truth is Barbados is 16 miles across from West to East and 21 miles from North to south, so this situation is being managed by tourists and residents in the affected areas simply choosing another one of our many beaches to go to. Atlantis Submarines has two miles of reef on which it plies its trade and can easily navigate around any potential surface issues. On a positive note we hope that some of the sea life that breeds in the Sargassum ends up taking permanent residence on the near shore reefs so we can showcase them on submarine tours for years to come”.

The Atlantis Submarines Barbados operation is part of a fleet of submarines headquartered in Vancouver, Canada with sister submarine locations in the Cayman Islands, Aruba, Cozumel, Mexico, Honolulu, Maui and Kona in Hawaii and in the US territory of Guam. For further information contact bdsres@atlanrtissubmarines.com or Roseanne Myers, General Manager, Atlantis Submarines Barbados at rgmyers@atlantissubmarines.com.

Activities & Attractions, Barbados Travel News
activities, atlantis submarines, attractions
Was this helpful?
How can we improve it?