Since November 2018, visitors to Barbados have had a wonderful new activity to enjoy – a train ride at St Nicholas Abbey and Cherry Tree Hill on the St. Nicholas Abbey Heritage Railway!

Restoration of the German locomotive has been completed. The route is cleared, rails laid and the train is running.

The round-trip ride starting at St. Nicholas Abbey covers 3km and lasts for approx. 45 minutes, including stops. One of the highlights will be the stop at Cherry Tree Hill with its magnificent views of the Scotland District countryside and eastern coastline. 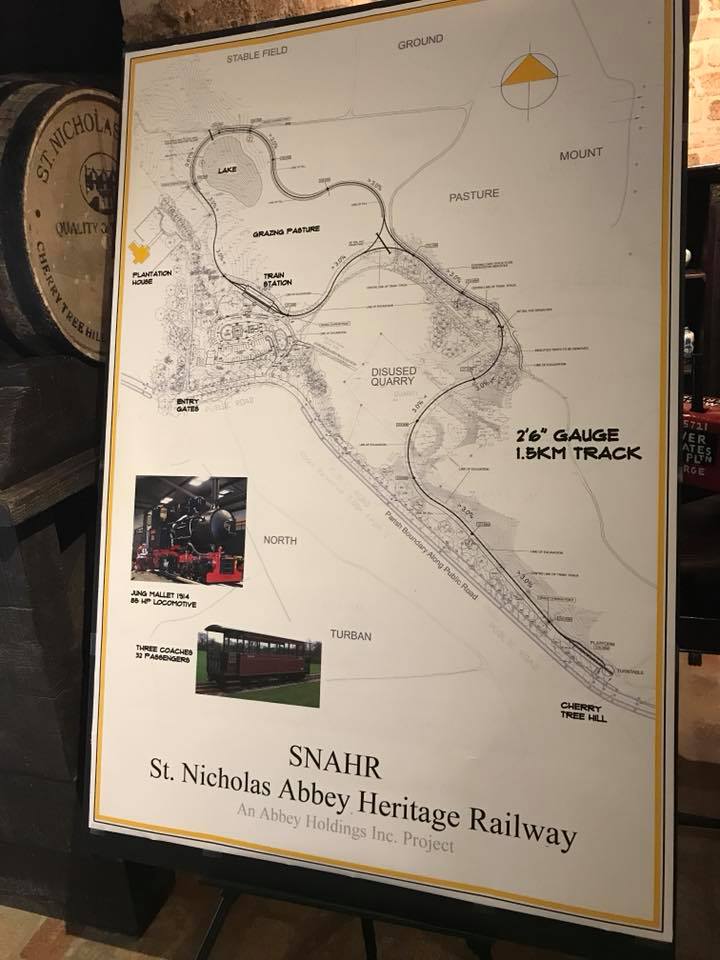 Did you know that Barbados once had a train service that ran from Bridgetown to Belleplaine (just north of Bathsheba) on the East Coast? The annual Great Train Hike retraces this route.

Delightful Narrative of the Historical Railway

Movie by lifestyles of the artisan – Also published on Instagram IGTV (c) http://irclay.lifestylesoftheartisan.com

A delightful story of the Railway in Barbados and the old steam engine train used in the sugar and rum industry. The old train was much loved by Barbadians of all walks of life. It opened up the East Coast to all Bajans and provided affordable transport to everyone.

Take a Tour on the Train

Enjoy the views, the stories and the ride on this nostalgic trip back in time!

Origins of the SNAHR Steam Engine

The Steam Engine Locomotive was built in 1914 by Arnold Jung Locomotive Works in Germany. It was formerly used by Ceper Baru Sugar Mill in Central Java, Indonesia. Later, it ended up in the steel and coal industry in the UK. It was rebuild and delivered to Barbados in February 2019.

The tracks are just over half the size of a normal railway, at just 2 foot 6 inches. The normal gauge is 4 foot 8 and 1/2 inches. The rail tracks are made of compound malice steel. The smaller size costs less, uses less land and is easier to maintain. It was popular throughout the British Colonies.

Steam is generated from a Wood Fired Boiler on the train. In the old days, the engines used in the sugar industry were fired by Bagasse, a by-product of making sugar and rum from sugar cane.

It is the pulp of the cane after it is ground and the juice is extracted. Bagasse is used at St. Nicholas Abbey to fire the boilers that drive the sugar mills.

The Barbados railway company had an extraordinary hand book of rules. One of the most popular was that the train was instructed to sow down if there were passengers along the track who wanted to get aboard.

There were few stations along the way and the slowdown accommodation allowed passenger to safely get on the train at convenient places along the track. The same passengers would eagerly lend a hand when the engine needed an extra push.

The old railway traveled over some harsh and steep terrain. At times when the train was heavy laden, the vintage steam engine would struggle to make the climb. Passenger had to jump off and push the train.

The old Barbados railway existed for 56 years, from 1881 to 1937. It made the island accessible to all. Many people who lived in Bridgetown had never seen the East Coast. That was a 3-day walk and not many were up to that. The train transformed 3 days of walking into a less that 2 hour scenic ride.

The train started the Sunday picnic which took people to Bathsheba for just a couple of pennies. The picnic is still popular today with local buses replace the old steam engine. See the story of life in the old days (at end of this page)

Sharpest & Steepest Incline in its Time

At Conset Point, the train did a hair-raising hairpin turn on a 80-foot gradient. It was the steepest gradient ever built on any railway at the time. It was a spectacular event as the train descended through 80 feet of hand-cut rock through a dark cavern. It emerged into the village of Bath and the cut rock gave way like a curtain to the breathtaking view of the East Coast and its rugged shores and raging surf.

At its height the Barbados Railway fleet included 5 engines. There were 11 passenger cars. There were 10 open cars for goods and 20 sugar tank cars.

It was a sizable investment which became unsustainable as the vessels aged. The rugged terrain took its turn on the tracks which were subject to tides and crashing waves along the craggy coast. Wheel, brakes, rails engines and cars fell into disrepair, The tracks, engines and cars required a lot of maintenance.

Climate and Time Takes it Toll

Barbados climate and salt sea air all played havoc with the business. Freight and passenger traffic steadily declined after the hay days of train rides and Sunday picnics. In 1934 passenger traffic was discontinued in 1934. Goods transport was cut back. In 1937 the railway was officially closed.

You can trace the railway with other walkers. The hike takes place in February and starts early to avoid the sun. It traces the old railway lines from Bridgetown to Belleplaine. https://barbados.org/blog/barbados-great-train-hike

Railway Stories bring back a sense of nostalgia for the past. Life was so much measured then, people took time to appreciate everyday living. Here is a story of the Gibson family and their trips to Cattlewash and Bathsheba on the train.. Its a story from WorldSagas, all based on reality. WorldSagas stories are a composite real people but names and characters are fictional. 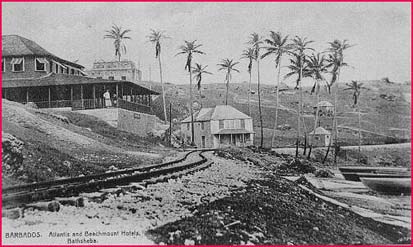 Bathsheba In The Old Days

Insert from lifestyle stories and WorldSagas by Ian R. Clayton.

It was different in the old days when the trains ran along the coast to Bridgetown. The Gibbsons came with picnic baskets, suitcases, the children and the cow. There was no store selling fresh milk and Mrs. Gibbson knew that fresh milk was important for the family, especially the growing boys, so they always tried to bring Nelly the cow. Each year, when Mr. Gibbson took his month’s holiday from the sugar factory, they came by truck, packing cases, Nelly and the boys piled into the back. Sometimes Mrs. Gibbson and the boys came by train for just a week, sometimes they came just for the weekend. There were always friends and families in the nearby homes; the children played in the Gully, caught crayfish in Joe’s river and picked sea moss from the rocks. Mrs. Gibbson boiled the sea moss and made it into a jelly which they ate. It did not taste so great but it was good for you.

It was before Surfboards had been, but young Bathsheba boys still played in the waves, without a thought of being stars. They stared at the families getting off the train and piling into donkey carts for the ride to Cattlewash; white ladies in white lace, elegant and upright under straw hats and parasols. They were in different worlds, much more so then than now. Beach boys in the early 1900 could not be stars, they could not hope to mix with the ladies or their children. But the worlds have changed. White boys today ride the waves with Boss and the gang. The mothers and the boys dance reggae in the same crowd on Fridays at the Round House, while Mrs. Gibbson turns in her grave.

Take a Tour on the Train

Take a step back in time and retrace the historic railway path
– Get on Board the St. Nicholas Abbey Historic Railway Tour