St. Nicholas Abbey is now a formal part of the Barbados Tourism Encyclopedia’s promo for independent holidays. The promo, which will run for some time, is a project of the BTE, TravelersInsights magazine and the islands premier Beach Villa Hotel.

As the oldest and most popular heritage plantation building in Barbados, and one of only 3 Jacobean-style buildings still standing in the western world, St. Nicholas Abbey is the perfect complement to a heritage holiday. 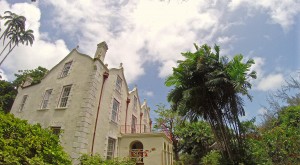 Introduced into the British landscape in the reign of James I of England (1603–1625), the Jacobean style saw the adoption of Renaissance motifs from German and Flemish carvers and was a departure from the Italian style of the Elizabethan design. St. Nicholas Abbey follows in style with the use of columns and pilasters, round-arch arcades, and flat roofs with openwork parapets. With them are a mix of the prismatic rustications and ornamental detail of scrolls, straps, and lozenges which are characteristic of Elizabethan design. The style also influenced the design of the furniture and other decorative arts that can be found throughout the house. 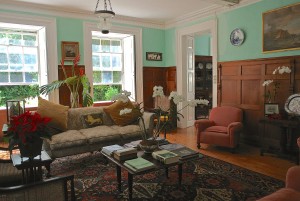 The Abbey was very much designed in the British tradition completed with three chimneys and fireplaces. Although used in cooking, the fireplaces and chimneys were put in place by builders following plans made in London with scant modification for its location in the tropics. Time has proved that the design of flat roofs, pilasters, round-arch arcades, and openwork parapets were adequate for tropical storms and even hurricanes in the 300 years that it has stood in place.

There is, of course, much more to visit including the steam mill, the refinery and the well-maintained grounds, stables, courtyards, sugar can fields and gullies.

Larry Warren, well know for his distinctive architecture on the island, says that he purchased the property to be sure that it was properly preserved for its significant to the heritage of Barbados. “The house is a remarkable Jacobean architectural masterpiece really. We knew it could work very well as a heritage attraction, but we also wanted it to be sustainable, and we wanted to build that on it history.” 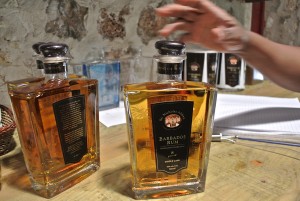 From that early vision came the idea of re-establishing the plantation as a high-quality distinctive rum, sugar and molasses producer. Using the original 1890 steam mill and modern refining equipment, the plant now operates during the sugar cane season to produce a much sought-after product that, unlike many others, is the results of painstaking handiwork. As Larry says, “You put the best spirit into the barrel and then it is all about time.”

St. Nicholas Abbey gourmet sugars are beautifully presented in jars specially made and designed for the Abbey, as is the rum bottles. They make wonderful gifts and many visitors stop to have them hand engraved for friends and family back home.

For More info Download the FREE TravelersInsights Magazine at VillasAway.com

Nicholas Abbey is one of many heritage properties in Barbados. One if the very distinct features of Barbados Heritage Tourism is its stately homes and plantations. There are  plantation hotels, heritage hotel, stately home inns and a eclectic  mix of inns and accommodation in heritage locations