A Sea Egg Excursion in Barbados

Sea eggs (sea urchins) are a local delicacy… see how we got some and how we cooked it up!

The sea urchin is commonly found in the waters surrounding Barbados, especially on the eastern and southern coasts. The golden roe is a delicious delicacy, enjoyed by Barbadians for many years. Unfortunately a decline in the sea egg population led to extensive bans on harvesting. But good news… the ban has been briefly lifted and Bajans are once again enjoying this delicious treat.

Our search for sea eggs began with a trip across the island from the west coast to the eastern fishing village at Conset Bay. Under sunny skies we set out, and after a few missed signs and detours, arrived at this beautiful bay. 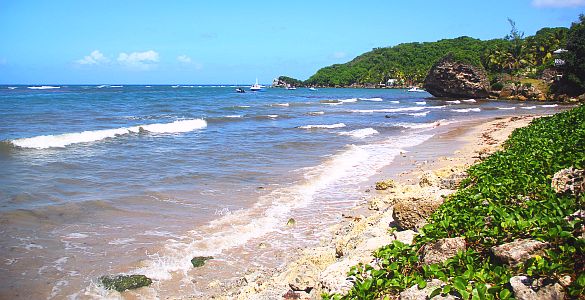 As soon as we alighted from the car, we were greeted with friendly calls of “You looking for sea eggs?”. Replying in the affirmative, we were directed onto the jetty where the roes were being harvested from the urchins collected that morning by local divers.

Several persons were seated on the jetty, hard at work. Some (known as the “breakers”) were cracking open the sea eggs and scooping out the roe; others carefully washing the roe in buckets of water to remove sand and shell; still others were packing the delicacy into containers, ready for sale. 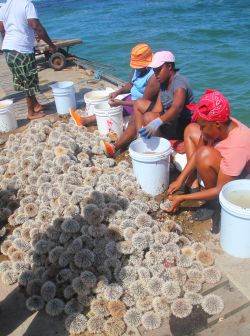 Sea egg action on the jetty

The whole bay was a hive of activity as some professional fishermen headed out in colourful boats, while the amateur fishermen fished off the jetty with poles, quickly catching the fish that were attracted to the discarded sea eggs shells being tossed back into the sea by the “breakers”.

We approached the first sea egg vendor but were told that he was selling the last of his catch. He suggested that we to head to another vendor at the end of the jetty. Alas the jetty was blocked by the sheer abundance of sea eggs. Seeing that we couldn’t walk along the jetty, the vendor quickly hopped off the side and onto the tyres that line the jetty. With amazing agility he quickly made to the other vendor and arranged for him to package up a portion of sea eggs for us… Bajan hospitality at its best! 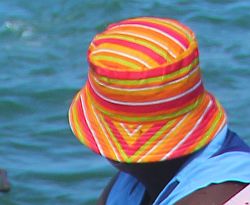 As we waited we enjoyed the banter of the “breakers”, including one whose colourful hat was repeatedly blowing off in the brisk tradewinds.  On several occasions, persons on the other side of the jetty had to grab the hat before it landed in the sea! She didn’t seem too worried as she repeatedly placed it back on her hand, brushing aside suggestions that she “tie it on”!

We admired the skill on display as each shell was quickly cracked and opened, and the sea egg roe carefully removed. 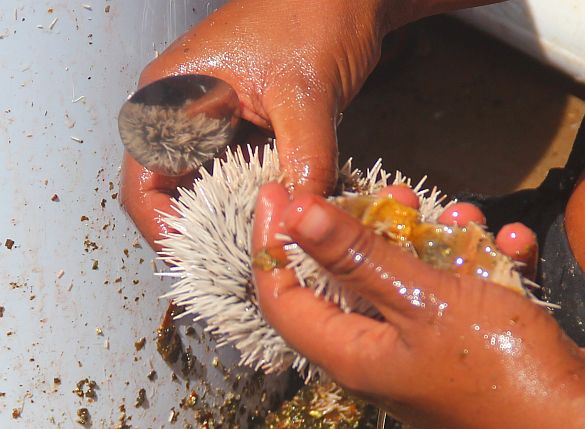 After a few minutes our sea egg was ready, and with hearty thanks to both vendors, we headed home to prepare the dish.

Next time you visit Barbados, be sure to ask at your hotel if sea eggs are in season. If you’re staying at a self-catering accommodation try preparing the dish yourself; if not ask at your hotel for any nearby restaurants serving this dish. 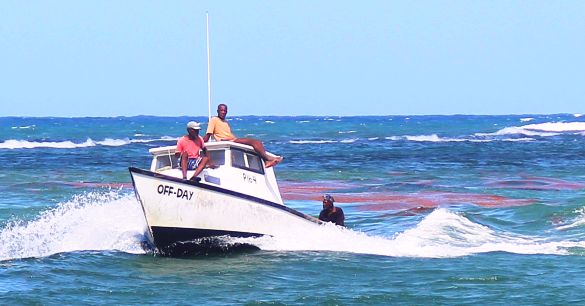 No “off-day” for these fishermen!

Barbados Travel News, Cuisine & Dining
cuisine, dining, sea eggs
Was this helpful?
How can we improve it?