Two sites in Barbados have been nominated for inscription on the World Heritage List overseen by the United Nations.

These sites are the capital city of Bridgetown and the historic Garrison Area.

Bridgetown was established in 1628 shortly after the arrival of the English settlers and is said to derive its name from an Arawak (Amerindian) bridge found spanning the waterway in the area. Bridgetown became the hub of commercial activity in the island and at the peak of Barbados’ rum and sugar industry the Careenage in Bridgetown was always full of   vessels anxiously packing up this precious cargo for delivery in European and North American ports. 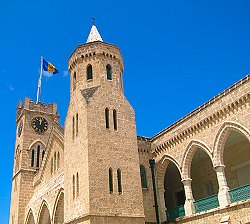 Bridgetown is home to many historic buildings and monuments including the 3rd oldest parliament in the Western Hemisphere, a statue of Lord Horatio Nelson that predates that in Trafalgar Square and a monument to fallen soldiers.

Despite the emergence of new shopping malls, a trip to Bridgetown (or simply “town” as we Bajans say) is still a favoured activity. As a visitor to the island Bridgetown is well worth exploring. Not just for the excellent duty free prices and local goods on offer but also for a chance to see the historic sites and mingle with a local crowd.

If you’re visiting by cruise ship, Bridgetown is just a 10 minute walk from the Cruise Terminal where you dock. If you’re staying in Barbados, several hotels offer a drop-off service to Bridgetown so ask at the front desk. Otherwise you can catch the bus or hire a car.

In our next post we’ll explore the historic Garrison Area, Barbados’ other nomination for the World Heritage List. In the meanwhile we invite you to take a virtual tour of Bridgetown!

A World Heritage Site is defined as a place of either cultural or physical significance. The World Heritage Committee meets from June 19-29 2011 and will decide which nominated sites gain inclusion on the prestigious list.

Heritage
barbados, bridgetown, caribbean, heritage, historic
Was this helpful?
How can we improve it?