A visit to Gun Hill signal station and lion

Having read on Facebook that substantial improvements had recently been made to the Gun Hill Signal Station, I decided to head over and have a look.

My first memories of visiting this historic site are as a little girl with my grandmother. She loved to explore Barbados with my brother and I, driving us around the island in her little Mini. I’ve always had a love of history and recall being absolutely fascinated by this intriguing place with its imposing walls, military memorabilia, and incredible views. The lion statue was also a great delight. 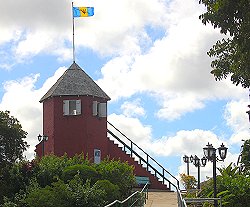 So in the early afternoon on a slightly overcast day, I was winding my way through the countryside to visit Gun Hill once more.

On arrival I was greeted by the young man who manages the cafe (Fusiliers), and invited in. Immediately I could see signs of the recent upgrades and improvements. The cafe leads onto a wonderful sheltered deck with picnic tables and magnificent views. Smiles were on the faces of those seated there enjoying a refreshing drink.

The pathway leading up to the signal station has been made wheelchair-friendly and is now lined with beautiful lamps and benches. The station itself was looking splendid with a fresh coat of bright reddish maroon paint and with the Barbados flag flying proudly above.

My first stop was the wrap-around balcony with it’s magnificent views of the south, central and west of the island. Build in 1818 at 700 feet above sea level,  this station was strategically placed in the center of the island and formed part of a network of signal stations that crisscrossed the island spreading news of approaching enemy ships, arrival of cargo ships,  civil uprisings and hurricane warnings. 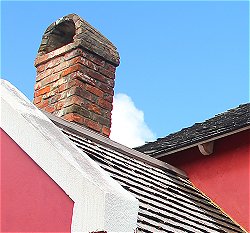 By this time, the light clouds had been blown away and the island was bathed in sunshine.

Tearing myself away from the view, I headed into the lower rooms to examine the military memorabilia.

Here you get a sense of what daily life was like for the soldiers stationed at the station. Signage in the small kitchen tells of the diet and culinary habits of the British troops stationed here. The kitchen contained its own fire hearth and chimney along with a spit fire.

The second room contained interesting military items such as bayonets, militia belt buckles and regimental buttons, along with military photographs.

Oh, and the views from these rooms are just as stunning as from the balcony!

The next stop was the the tower of the station! Grabbing hold of the handrail, I ascended the somewhat steep steps and entered the tower. As you can imagine, the views here are even more spectacular. Large windows provide panoramic views of the island and overlook the magnificent tropical gardens lining the pathway. 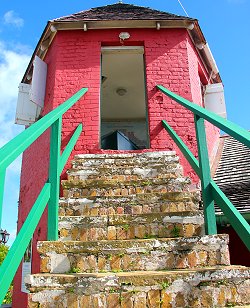 A map dated 1846 shows the location of the other Barbados signal stations and it’s clear the vital role that this central station played in relaying messages across the island.

Signage in the tower explains how the signaling process worked using signals and semaphores to convey a variety of messages. Detailed information, including the types of vessels approaching or landing in the island, and meetings of the Council of Barbados, was passed along seamlessly.

It’s truly fascinating how inventive man is in devising effective communication tools. I wonder what the soldiers who manned this station would think of modern communication methods such as facebook, twitter and snapchat?

With one last look around, I left the tower and headed along the pathway towards the cafe, admiring the beautiful historic lamps along the way. After a quick drink I was on my way to the famed lion statue, known locally as the Gun Hill lion.

The shade of the trees lining the road down to the lion offered a temporary respite from the heat, but I was soon back into the brilliant sunshine as I approached this wonderful statue nestled into the hillside just below the signal station. 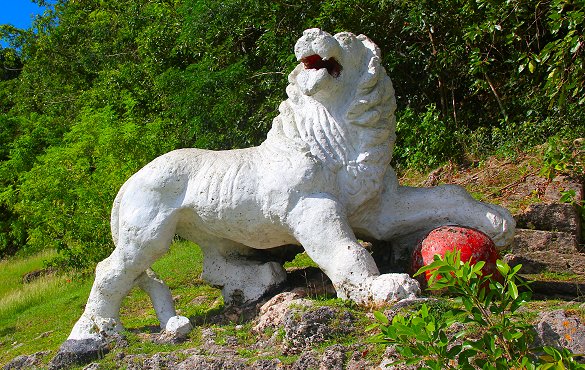 The lion was carved from a single piece of coral stone in 1868 by Captain Henry Wilkinson, who was stationed at Gun Hill. The upraised left front paw rests on a large red  globe.  The statue represents the might of the British Empire over the world (the ball representing the globe) at the time. It also represents the tremendous creative talent and dedication of Captain Wilkinson and the 4 military labourers who assisted him.

My Roman numeral skills from school days long forgotten, and having never learned Latin, I had to consult a guide to interpret the inscription under the lion. The Latin translates to ‘He shall have dominion also from sea to sea, and from the river, unto the ends of the earth’. The Roman numerals indicate the year – 1868 – that the statue was carved. 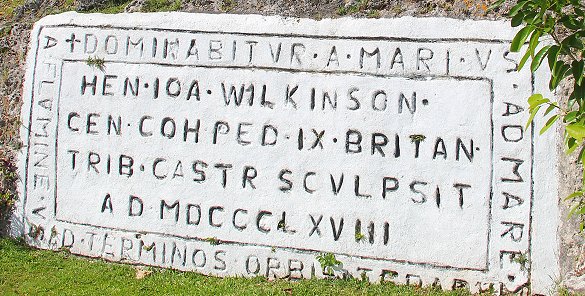 So ended my brief step back in time, into the rich history of Barbados and the more recent 🙂 history of my childhood. It was a refreshing experience and a reminder to take note of the many historical buildings and sites on our beautiful island and to appreciate the legacy of those that came before us.