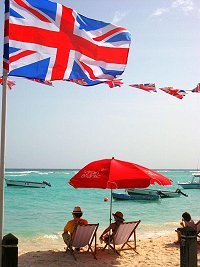 Barbados has a distinctly British heritage. The first English ship touched the islands shores in May 1625 and Barbados was claimed in the name of King James I.

The English returned as settlers 2 years later and Barbados flew the British flag until becoming an independent nation in 1966. This was quite unusual as there was fierce competition between the European colonial powers – English, Spanish, French and Dutch –  for the highly prized Caribbean islands. In fact, most of our neighbouring Caribbean islands changed hands on numerous occasions.

The influence of the British can be seen today throughout Barbados, in our language, governance, architecture, place names, past-times and behaviour.

To defend the island from invasion, the British built forts and signal stations across the island. Many of the military buildings were centered around The Garrison on the south-west coast of the island. Several of these remain today as part of the UNESCO World Heritage Site – “Historic Bridgetown and Its Garrison“. There is a “Changing of the Sentry’ weekly at the Main Guard.

The Parliament of Barbados is the 3rd oldest in the entire Commonwealth (only Britain and Bermuda are older) and the island continues to practice the Westminster style of government. 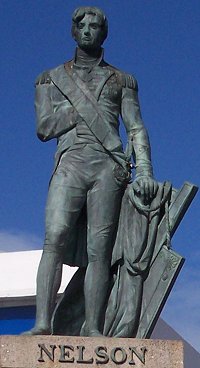 Just outside of Parliament Buildings is a bronze statue of Lord Horatio Nelson, erected in 1813 by the settlers of the day in recognition of Lord Nelson’s bravery. This statue predates Nelson Column in Trafalgar Square, London by nearly 30 years!

A much more modern testament to Barbados-UK ties is the Barbados Concorde Experience! Concorde had only four regular destinations: London, Paris, New York and Barbados. In recognition of the role that the island played in Concorde’s success, a Concorde – one of only 20 ever built – was loaned to Barbados by British Airways.

HM Queen Elizabeth II is the Head of State of Barbados. To celebrate her Diamond Jubilee, a UK-style street parade was held in St. Lawrence Gap Barbados complete with British music and food.

Many place-names in Barbados are clearly British, some in honour of British royalty and some perhaps in fond remembrance of home. Examples include:

Many of the historic Anglican churches and plantation houses across the island show the influence of English architecture.

Barbados also follows the English traditions of driving on the left side of the road and school uniforms for primary and secondary schoolchildren.

And speaking of traditions you can’t get much more traditional than cricket, the national sport of Barbados. Kensington Oval, on the outskirts of the capital city of Bridgetown was the first West Indian ground to host an English touring team (in 1895). Over the decades Barbados had produced cricketing legends such as Sir Garfield Sobers and the 3 Ws (Worrell, Walcott and Weekes).

Cricket at Kensington Oval, Barbados; no not at Lords 🙂

Barbados has been blessed with influences from across the world and today is a culturally diverse society. But there is no doubt of the heavy British influence on our past and present.

Barbados Travel News, Heritage
barbados, british, english, uk
Was this helpful?
How can we improve it?