Maycocks Bay is an idyllic little spot on the north-west coast of Barbados.

Getting here can be quite the adventure.. just read how 4 Bajans got lost trying to find it! But if you follow the signs and ask for directions you'll find it too and be rewarded with a quiet piece of paradise.

From the clifftop overlooking the bay, you'll enjoy fabulous views up and down the coastline. Whales are often spotted here in the early morning between December and April. 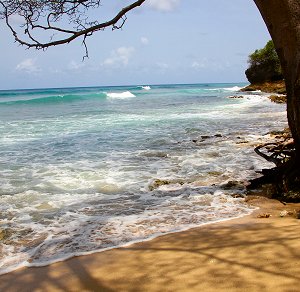 After parking, head south on foot until you find a fairly steep track that leads down into the bay. Good footwear, rather than flip flops or sandals, is advised.

Swimming is not recommended at Maycocks Bay as there are rough waves and strong currents in the area. For seabathing head over to River Bay instead. The reefs do make it a good spot for snorkelling and scuba diving. Divers will also enjoy exploring the 169 foot wreck the "Pamir" just to the south of Maycocks Bay.

Although the very best surfing spot in Barbados is on the east coast, Maycocks Bay also attracts adventurous surfers along with kiteboarders and kitesurfers.

The bay is named after Thomas Maycock, one-time landowner of the area. There was once a fort - Maycock's Fort - located here. Local rumour has it that there was treasure buried in or near the fort and it has never been found! Read more about Barbados forts.