The Barbados Garrison, largest in the British Colonies during the 18th and 19th centuries, is of great historic interest and offers many features, other than military, for those so inclined.  It was established in 1780 as the military headquarters for the Imperial Forces stationed here until 1905/6.  However, it began with St. Ann’s Fort, on its present site, in 1705. 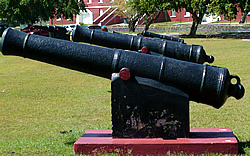 The Barbados National Armoury was opened in 2004 inside the old naval magazine alongside the walls of St. Ann’s Fort. It is there Barbados’ impressive Gun Collection is housed, amongst which is an Elizabethan cannon of 1600, the only one known to exist anywhere in the world.

The imposing Drill Hall, first used as soldiers’ barracks and later as a commissariat, was built on to the walls of St. Ann’s Fort in 1790. Today, it is the Officers’ Mess, the Sergeants’ Mess and the Corporals’ Mess.

Over the years the Garrison area has expanded and now includes the Savannah as well as some buildings in Bay Street and Hastings. This Savannah is one of Barbados’ most popular recreational areas – for toddlers to octogenarians. Starting before dawn, continuing to well after dusk one sees walkers, joggers, rugby and basketball players, skate board enthusiasts, people flying kites, gossipers, lovers and those who just want to relax and watch the world go by.

Importantly, the Savannah is the home of the Barbados Turf Club whose Grand Stand and surrounds are packed to capacity on Gold Cup day which occurs the first Saturday in March every year. Other race meetings, held during the year, afford pleasant and relaxing occasions to be enjoyed by fans as well as casual onlookers. It was first used as a race track by regimental officers whose horses competed against those of wealthy plantation owners.

There are no facilities for the game of cricket there any more, but it was the venue of the first inter-colonial cricket match in 1860 between Barbados and British Guiana – as Guyana was then named. I don’t have to tell you who won the game! And, it was on this Savannah, in front of thousands of cheering supporters, that young Gary Sobers, the world famous Barbadian cricketer, knelt before Queen Elizabeth II to become Sir Garfield Sobers. 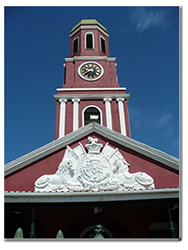 The Main Guard, overlooking the Savannah, is one of the area’s most outstanding buildings architecturally and has a unique George III Coat of Arms, in Coade stone, which was designed specially for this building.

In 1906, the Main Guard was bought locally and converted into the exclusive Savannah Club but is now owned by the Barbados Government and is the headquarters for organisations such as the Barbados Legion and Barbados Poppy League.  It has a most imposing clock tower which chimes its way through the day helping those with no time-pieces of their own.

Behind the Drill Hall there is the seashore.  During the period November to July it is very popular for wind-surfing, a sport that takes Barbadian competitors all over the world.

Moving north, down Garrison Hill, on to Bay Street, you will pass the Barbados Light & Power building on your left.  That was the Commissariat Provision Store at the end of the 18th century but later became the Garrison Theatre.  A hundred yards further on there is the Engineers’ Pier which leads to Hilton Barbados built on the old Charles Fort site and bounding on the Barbados Military Cemetery.  The latter is situated between the Charles and St. Ann’s forts and came into existence c1780.  Burials of ex-servicemen, women and their families have been taking place there ever since.

A few hundred yards on, again on your left, there is the Barbados Yacht Club, formerly Shot Hall, erected in 1810.  This was the private residence of the Officer Commanding the Royal Engineers.

Of course there are other imposing Garrison buildings, often built of London brick brought here as ballast, dating back to early days.  For example, there is the Stone Barracks, The West India Barracks, and Stafford House and also The Barbados Turf Club offices which were the Military Engineers Officers’ Quarters originally.

Then there is George Washington House, formerly Bush Hill House of Georgian architecture at the top of Bush Hill.  This is where its namesake stayed in 1751 – the only place President Washington lived in, outside of the USA.

A visit to the Barbados Museum and Historical Society is a ‘must’.  Situated in what was the Military Prison, the Museum showcases the island’s cultural heritage and houses the Shilstone Memorial Library with its research material. There you will find a shop where local crafts, books, etc. are available.

There are some charming buildings, built around the time of the devastating 1831 hurricane, now residential, that were Garrison buildings up to 1905/6.  These are on Garrison Road nestled amongst beautiful old trees overlooking the Savannah.

Pass these houses and turn left to travel east along Highway 7.  Soon you will see the Pavilion and Pavilion Court, at one time the Surgeon General’s quarters and the Garrison Hospital.  Not much further along, turn into St. Matthias Gap and find the beautiful St. Matthias Church.  This was the Garrison Church for the British Forces as it is now for the Barbados Defence Force and other military units.  There is a very impressive tomb in the graveyard erected in memory of those who died of yellow fever on the H.M.S. Dauntless.

An exploratory visit through the Garrison area can be most rewarding and affords an interesting trip back into the heritage of Barbados.