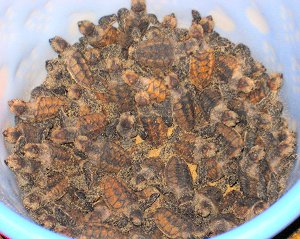 The Barbados Sea Turtle Project (BSTP) was started in 1987 to promote conservation of sea turtles in Barbados. It is a joint activity of the Department of Biological and Chemical Sciences at the University of the West Indies, Cave Hill Campus and the Fisheries Division of the Government of Barbados.

The BSTP relies upon the co-operation of the general public, particularly hotel staff and guests, and other persons living and working near the beach, to monitor nesting and hatching activity during the turtle season (April - December).

If you visit Barbados during the winter you can assist with the release of turtle hatchlings. Check the BSTP Facebook page to be alerted to release dates & times.

Add your comments about the Barbados Sea Turtle Project