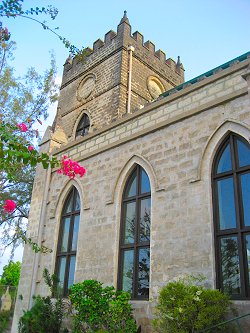 When the airplane dips its wings along the west coast, above the crystal waters, blue against the white sand beaches, and you see beyond that, the brown and green hills, dappled white and pink with coral stone and wood buildings, roofed in grey shingles and red clay tiles, you begin to tingle with anticipation for this exciting land. For this tiny island is an architectural delight of old and new, of elegance and simplicity, of history and tradition preserved and repeated through the years.

This is a land of Jacobean and Georgian buildings built with coral and ships ballast, of Victorian homes and wooden chattel houses trimmed in gingerbread fretwork, of sophisticated hotels and their manicured lawns amid the open spaces of the golf courses, the cricket pitches, the polo field and the Garrison Savannah. It is a land of pirates castles with their fresco ceilings, ornate Italian sculptures from the 16 century and the Gothic churches. It is the home of movie stars living beside cane cutters, the aristocracy, the artisan and the fisherman. It is a blend of people, style and structure. It is Barbados.

It was the British, who came with the long and narrow medieval buildings, the Georgian, the Jacobean and the Victorian designs.

It was unbroken British conservatism that led to consistent uniformity, to balance and harmony, without the more flamboyant influences of the Spanish, French and the Indian Ornamentation so typical of other islands in the Caribbean.

It was the wealth of sugar that built the great plantation homes, solid structures of coral rock, furnished with mahogany, standing now as a heritage of grandeur.

It was the Barbados natural coral limestone, cut out of the terraces of the ancient sea cliffs, that became the distinctive building blocks of the stately homes, setting Barbados apart from its neighbors with their mostly wooden buildings in the Caribbean style.

It was the Caribbean climate of wind, rain and heat, that led to gable roofs, the big open verandas, the low hurricane resistant rectangular shapes, and the sturdy shutters of the sash and jalousie windows.

It was African craftsmen, with their skills and traditions that adapted European style and symmetry into a unique Barbados heritage of wood, stone and coral.

It was history and tradition, a people set apart, unbridled privilege, bondage, pride and passion, both African and British, that mined the coral stone, carved the wooden banisters and cast the terra cotta tiles to lay the framework of this heritage.

It was a past, rich in tradition and history that influenced all that followed it.

Buildings and the Builders of the Past

St. Nicholas Abbey in St. Peter and Drax Hall in St. George two of the oldest buildings in Barbados, both built in the 1650's, stand as proud examples of the Jacobean tradition. Drax Hall, is the oldest surviving Jacobean mansion in the Western Hemisphere. Only three of these mansions exist in the Western World, and it is Barbados' good fortune to have two of these treasures. The only other remaining structure being Bacon's castle in Virginia.

The brothers James and William Drax, built Drax Hall as one of the earliest and biggest sugar properties in Barbados. They were a wealthy and well connected family that had a special love for Barbados. There were others like them, for Barbados prospered with sugar and its plantation owners held considerable influence at home and abroad.

In the seventeenth century Georgian architecture predominated the Caribbean and many Barbados plantations, homes and buildings were designed in this style. The British Garrison stationed here in 1780 carried out an extensive building program of Georgian and Palladian style. They built the Hastings Hospital (now Pavilion Court) as well as many barracks and residences at the Garrison. These Georgian buildings with their grand Palladian staircases, majestic arcades and pediments have influenced all Barbadian architecture, from the great plantations, to the simple chattel house.

The Victorian period became incorporated into the tradition of Barbados rather than standing on its own. Sash and Jalousie windows were alternated on the buildings facade in perfect proportion. The open verandas were decorated with carved wood tracery and the window parapets were trimmed with filigree, which diffused the light and cast patterns of shade into the sheltered rooms. Victorian frills were adopted in the design of the chattel homes. Chattels, which means movable, were the homes of the sugar cane workers who lived on plantation lands but owned or rented their home from others.

The chattel home was built of wood and set on blocks of coral, without a foundation, so that it could be easily moved in case of a landlord and tenant dispute. The chattels were simple structures but the workmanship and design show remarkable dedication. The tiny chattel house, often skillfully replicate the details of the grandest villas. Ornate fretwork, carved wood bannisters and miniature Jalousie windows decorate them in fine proportion. They attest to the character and the pride of Barbadian, and to their sense of respectability and worth.

There are many professional architects registered in Barbados and several more drafts persons, interior designers and landscape artists helping to keep this tradition alive.

Read about other Barbados traditions - music, culture, food and festivals.