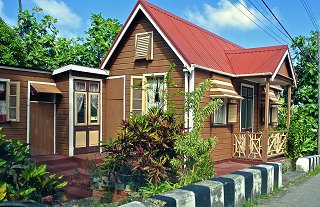 The Chattel House was originally the design of the plantation workers home. They were modest wooden buildings set on blocks so that they could be easily moved from one leaseholding to another. In early settlement days, home owners were not necessarily landowners, but part of a tenantry system of the plantations.

The houses were constructed to be transportable in the event of landlord and tenant disputes. The name chattel referred to the fact that they were movable property.

The steep gable roof, constructed of corrugated iron, were adapted to suit the climate of heavy rains and winds. The angle of the roof deflects the wind rather than providing a platform for it to lift off.

The fretwork around the windows and openings were placed there to provide shade and to act as a filter against the rain. Over the years fretwork has became an attractive architectural feature in its own right. Many chattel homes have distinctive jalousie windows, with three sets of hinges - two vertical and one horizontal - that allow maximum flexibility against the wind and sun.

Read "Little Houses", a poem about the chattel house