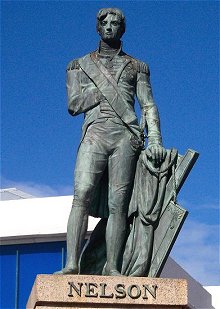 On 22nd March 1813, a magnificent bronze statue of Admiral Lord Horatio Nelson was erected in the capital city Bridgetown, in the area known as Trafalgar Square, opposite Parliament Buildings.

On November 16th 2020, the statue was removed from Bridgetown and moved to the Barbados Museum and Historical Society. During the removal ceremony Prime Minister Mia Amor Mottley stated: "While we accept that the statute of Vice-Admiral Lord Horatio Nelson is an important historical relic, it is not a relic to be placed in the National Heroes Square of a nation that has to fight for too long to shape its destiny".

Heroes Square remains a wonderful stop when you visit Bridgetown, with views of the historic Parliament Buildings and picturesque Careenage as a back-drop. The Square is home to the Dolphin Fountain and the Cenotaph.

Nelson visited Barbados in 1805 and was considered a hero by locals of the day for his battles against the French who controlled some of the other islands in the Caribbean. Indeed the French and British forces were often battling for ownership of the islands with several islands changing hands frequently. Barbados on the other hand remained under British rule until independence in 1966.

The removal of the statue from its prominent position reflects a move away from vestiges of colonial rule, and acknowledgement that Nelson was a strong defender of the British Colonial system which included slavery.

There is another wonderful statue of Lord Nelson in the enthralling Hunte's Gardens.