×
The story of the beautiful painting at St. George Church, Barbados. 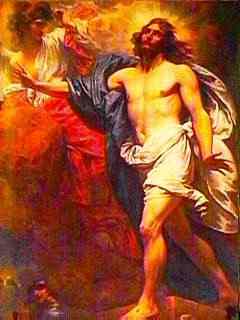 One of the treasures of St. George Church is suspended high just behind the altar.

It is the magnificent 5ft x 7ft painting of the resurrection of Christ, "Rise to Power" by Benjamin West. (Born October 10th, 1738) He became the second President of the Royal Academy in London, and was the only American to hold this honour. He held this post from 1792 until his death in London, UK. King George III was the patron of Benjamin West. Many of his paintings hang in Buckingham Palace.

During the last quarter of the 18th century the Honorary Henry Frere of Lower Estate Plantation, in the parish of St. George, and President of the Legislative Council, commissioned the painting for St. George Church. This painting was exhibited at The Royal Academy in London in 1786, and was labeled "Not for Sale." When it arrived in Barbados, The Honorary Henry Frere and the then Rector, the Reverend John Carter had a "falling out" and as a result, this masterpiece was dispatched to one of the outbuildings on Lower Estate Plantation and remained there for over thirty years.

Legend has it, that a frightened robber who was hiding in one of the outbuildings became so alarmed at the questioning gaze of the figure in the painting, that he stuck his finger into one of the eyes.

Every effort was made to rectify the damaged eye, but no artist rose to the challenge. A decision was then made to cover the eye with a pirates patch!

In 1820, the same year as the death of Benjamin West, the patched painting was placed in its current prominent position, and is a joy to observe when visiting the church.

This Benjamin West masterpiece "Rise to Power" is possibly one of this world's most beautiful paintings – which brings to mind the words of a popular 1977 song: "You light up my life. You give me hope - to carry on".

Add your comments about The Resurrection Painting