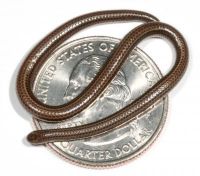 Unlike many other islands in the Caribbean, snakes in Barbados are quite rare. This is mainly due to the fact that the early settlers introduced the mongoose to the island. The mongoose is a small weasel-like mammal whose diet includes snakes, rats, lizards and insects. They were brought to Barbados to control the rats that threatened the valuable sugar industry. The mongoose virtually eliminated all snakes from the island.

The Barbados threadsnake is the smallest known snake species. It is believed to be endemic only to Barbados and the local population is thought to be quite small.

There is a collection of larger snakes at the Barbados Wildlife Reserve.

* image of Barbados threadsnake on an American quarter from Wikipedia.