Sugar has been an ideal crop for Barbados. White gold as it was called, produced great wealth, fame and stature for the island and the original plantation owners, and was in many ways suited to the island. It made good sense to grow sugar economically and horticulturally as its root structure helped to preserve the fragile top soil.

There are 1,500 small farms throughout Barbados which can produce some 60,000 tons of sugar annually.

Yields of sugar per acre are below average in Barbados compared to some other islands like Cuba. Poor mechanization and dry seasons are to blame for this. Most of the 30,000 acres being used for sugar farming in Barbados are relatively small farms of 200 acres on average. To properly benefit from mechanization a farm should be not less than 700 acres. In addition few farms in Barbados are on flat land, and the hilly terrain is not the best for mechanization. This was not a problem in the old days when manual labour was the only form of harvesting, but as other regions have benefited from mechanization, Barbados has not.

To find about more about the history of sugar production in Barbados, visit the Sugar Museum. 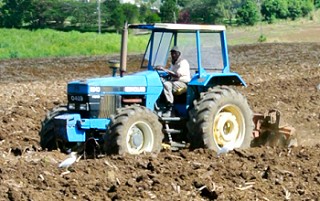 Sugar cane planting has been modified over the centuries to help preserve the fragile top soil from erosion, but soil erosion continues to be a problem in many parts of the island particularly on the east coast. Sugar grows tall, its fibrous roots spread out and help to bind the thin layer of soil, a mixture of volcanic ash and sands, deposited over the years by winds bringing seeds, and ash and flora from neighbouring islands and distant lands. In recent times, Dr. Colin Hudson measured 6 tons per Acre of ash deposited in a single field as a result of volcanic activity. Some say up to 30 tons per acre have been clocked. The Coral Island of Barbados, pushed out of the sea millions of years ago, owes much to the active volcanoes in the region.

In the old days plantation owners grew other crops between the rows of tall sugar canes. The fields were edged with ditches so that water and earth running off collected and was not lost. The practice still exists for many crops.

Early in 1858 Barbados established a cane research laboratory - It pioneered in developing new strains of cane that were resistant to pests and climate change. Barbados was first to discover how to propagate plants from the seeds of the cane arrows. It led the world in cane research which helped to make it the foremost produces of sugar in the Caribbean, and the birthplace of rum.

Speaker 1: Sugarcane breeding started in Barbados in 1888. The oldest institution doing this in the world. On top of that, Barbados was the place that discovered that you could actually collect real seed from these arrows and grow it into sugarcane.

Speaker 1: That fact was discovered, that you could actually grow sugarcane plants from the seed collected from the arrow, discovered here in Barbados in 1858. So, Barbados has a lot to be proud of when it comes to sugarcane.

Speaker 2: The latitude and longitude of Barbados is very similar in this part of the hemisphere to that in the Southern hemisphere where canes actually originated. So, hence, breeding is more successful in Barbados because we can get cane to arrow.

Speaker 2: This cane breading station has also done some unique things in that those fellows who are not cooperative in arrowing, they can actually adjust them to arrow.

Speaker 2: Station actually has got up lights over the top of the fields, and they actually switch on the lights above the field to induce them to arrow.