All across Barbados you will find this michevious little creatures including in the gullies that run across the island and even in peoples gardens!

The green monkeys found in Barbados originally came from Senegal and the Gambia in West Africa approximately 350 years ago. About 75 generations have occurred since these monkeys arrived in Barbados and, as a result of environmental differences and evolution, the Barbados monkeys today have different characteristics than those in West Africa.

The monkeys are found mainly in the parishes of St.John, St.Joseph, St.Andrew and St.Thomas, where much natural vegetation and woodlands still exist. However, monkeys can also be seen traveling through hotel grounds in St.Peter and St.James.

You may observe an infant monkey being carried by its mother, with the infant clinging to the mothers fur on her stomach and chest and her protective arm around him. As the infant matures and becomes more independent, he will stray from his mother, being carried only when the troop moves or when danger threatens. 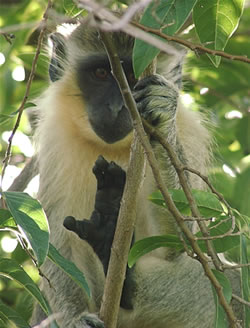 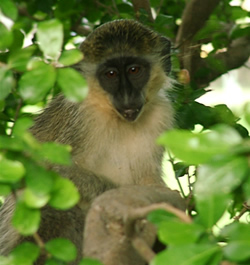 Infants often appear blue in colour, as they have little fur when they are born. However, as they mature, they develop a thick fur that is brownish-grey in colour with specks of yellow and olive green. In some lights, the fur has an overall green appearance ... hence the name the "Green Monkey".