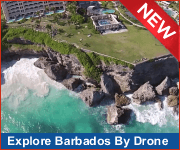 How to build beaches

The process of building the beaches requires many trucks of sand and rocks. The sand and rocks are transported from the Spring Garden holding area. Much of the sand used in this project came from the local deep water harbour which was further dredged in 2002 to accommodate the Queen Mary 2 on its maiden voyage .

One by one the trucks dump the rocks at the access point. The bulldozer builds the groynes which are strategically placed relative to tides and sea action. Then the sand is dumped and the dozer stacks it at the point to be built.

The stacks of sand are spread and smoothed making a beach and a platform for the dozer to build the next beach.

The video was impromptu - taken into the sun it is faded but still gives the idea. Here the bulldozer smooths sand that was previously stacked. Don't worry about the dark clouds overhead, they are just passing through!