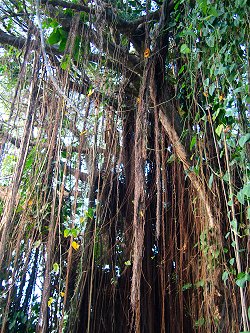 The Portuguese sighted Barbados in 1536 en route to Brazil and referred to the island as Los Barbados or the Bearded Ones presumably after the fig trees found on the island which, as you can see in the photo, have a beard like appearance.

These trees can become incredibly large and are a natural habitat for birds, bats and monkeys.

The Bearded Fig Tree can be found across Barbados especially in the natural gullies that run across the island, however they are nowhere near as plentiful as when the Portuguese visited our shores centuries ago.

The specimen captured in this photo can be seen at the Andromeda Botanical Gardens.