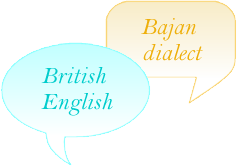 The official Barbados language is English, however you will hear our local dialect - referred to as Bajan dialect - spoken as well.

(See how some of our vendors use dialect.)

Given our long British heritage and inheritance of the British educational system, it is not surprising that Barbadians use British English including in the spelling of certain words (e.g. favourite vs favorite and centre vs center).

As the official Barbados language, English is used in formal settings and written communications.

In informal settings you are likely to hear Bajan dialect spoken. This Barbados language is a combination of British English and various West African languages.

Increasingly Barbadians, especially those working in hotels, restaurants and attractions, are becoming multilingual. French and Spanish are the two most common languages taught in schools.

Barbados has one of the highest literacy rates in the Western Hemisphere and boasts free education up to the tertiary (University) level.